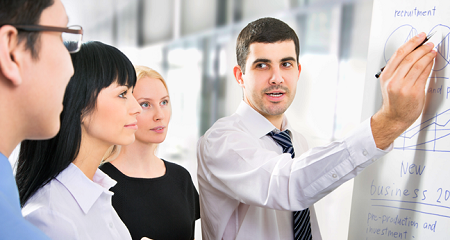 Question: Describe a situation where leadership and teamwork were critical to the outcome of a project in which you were directly involved. What did you learn from the experience, and how have you applied what you learned to other situations?

In 1999 I submitted a proposal to Merrill Lynch Investment Managers for a 12-month project to raise money for a charity called Contact the Elderly. I won support for my proposal, despite my lack of seniority, by persuading my managers of the connection between our business of managing pension funds and issues concerning the elderly in our society. Once the project was approved, I immediately set out to recruit a committee from among my colleagues and organize various fund-raising events.

As I was relatively junior, the committee I led consisted of more experienced and busier managers who had never even heard of the charity. I recognized that I would need to work diligently to gain their commitment to the project as well as respect for my ability as team leader. I fostered this respect by first demonstrating why the team should devote a year to this project. I invited beneficiaries of the charity and its volunteers to our office for a tea party, which gave the committee an opportunity to ask the elderly questions about how Contact had helped them and to talk with the volunteers about their work.

Once I had drummed up our enthusiasm, I tailored my approach to the busy lives of my team members. Because each one had only limited availability, I chose fundraising ideas that could be split into manageable chunks. For example, I persuaded one senior manager to sponsor a bungee jump (by volunteering myself despite a fear of heights), and he recruited other volunteers. The event raised $14,000 in an afternoon. The success of the bungee jump convinced me that if I defined the role each team member was expected to take, then I could supervise the overall project while other individuals fulfilled specific goals. By recruiting talented and reliable team members and ensuring that each person knew what they had to do, there was no need for me, as team leader, to micro-manage.

I also applied my approach to activities that required group coordination. When our team organized a summer fete for staff and their families, we had a tremendous amount of tasks, from finding a venue and an oompah band to organizing raffle prizes. Working as a team was imperative -- one person could not possibly have arranged everything in the time available. In addition, none of us wanted to overlook any of the small, yet significant details that make big events so enjoyable.

Our cooperation also helped us enjoy the work we were doing, because we could support and encourage each other throughout the planning process. In particular, I used my role to provide the kind of leadership that encouraged delegation of responsibilities and generated efficient time management. In the past, I had always hesitated to delegate tasks, preferring to keep control over my work, but in this situation I was eager to involve my team. I identified each member of the committee's strengths and assigned work accordingly. I also adapted my approach to individuals' susceptibilities, especially when giving feedback, striking a needed balance between listening to people's ideas and maintaining the team's focus. I also learned to deal efficiently with the unexpected -- for instance, a rather severe rainstorm on the day of the fete. Despite my fears that the grey skies would keep people from coming, the project was a huge success, raising an unprecedented $150,000.

The skills I acquired during my time working with Contact have helped me in my current job as an equity salesperson at Enskilda. My role at Enskilda, which is to build on our strength as a Nordic house by increasing our penetration into the UK, requires that I successfully identify where the firm lacks critical mass, work with our analysts to target our research more effectively, and encourage my colleagues to market European company research to their clients. The team aspect of my role has made my work at Contact especially significant.

For example, my ability to motivate others has helped me persuade my colleagues to invest in the efforts necessary to growing our business. I applied some of my previously successful leadership strategies to show, through my efforts with my clients, how Enskilda could increase revenue for each of its clients. I exercised authority diplomatically and made suggestions in a structured and sensitive manner, an invaluable strategy for offering Enskilda's analysts feedback on their research. Similarly, I am more aware of clients' specific needs or sensibilities, so I have been able to work with clients who need varying approaches and strategies.

Perhaps most importantly, my experience has helped me realize the significance of setting both short- and medium-term goals, rather than always keeping my eye on a distant target. Having a long-term strategy is important, but I have learned to define intermediate steps to help me keep track of my progress. My ability to measure my success has helped me manage my time effectively, both at work and in my personal life. My work with Contact, which began as a simple proposal for the benefit of charity, has become one of the secrets to my success.