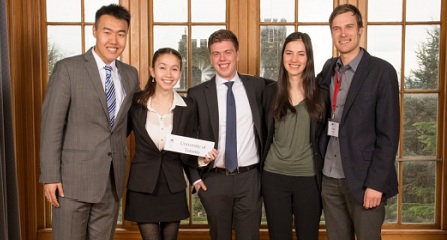 Although trained as an engineer, my most substantial accomplishments have been in non-engineering sectors since the management and finance divisions of my company necessitated my involvement and a change in my career goals.

From the early 1990's, after the introduction of the free economy in Bangladesh, almost all of our companies in our family owned business began losing money, and I needed to help save it. There I was, the poor little textile engineer, answering questions asked by people from Citicorp, the agents from Soros Funds, and many other local banks. Despite my lack of business expertise at the time, our issue was overbooked, and by the following three weeks we collected the money from the first privately issued bond in Bangladesh. I worked with a team of highly dedicated and experienced professionals with degrees from the finest institutions of the world. Through teamwork, I helped to save my company; I consider this the biggest achievement in my professional life.

My second biggest achievement was again saving the company. Our biggest textile plant, consisting of about seventy percent of our group's asset, was bought through tender from the government of Bangladesh under its denationalizing scheme. The payment was to be made through half-yearly installments, but our company began defaulting in late 1997. By that time Peregrine collapsed, and we were on our own. I proposed the board raise money by offering some of the company's vast vacant land for joint venture. Although the proposal was believed impractical and unattainable, I nevertheless contacted a number of multinationals. Only Cemex Cement of Mexico responded, but our deal eventually fell through and the government began preparing for takeover.

As a last minute resort to save the company, I prepared an attractive offer and contacted Scancem of Finland and Holderbank of Switzerland. Holderbank responded and opted for outright purchase of the land. However, they attached a condition that we complete all the formalities needed to set up their plant in Bangladesh before they make any agreement with us. We agreed and started working on the endless list of permits, permissions and licenses that one faces by investing in Bangladesh. I guided the whole process and coordinated the activities of engineers, lawyers, bureaucrats, financial advisors, etc. I also was forced to deal with the highest body of religious law, the Islamic Foundation, since there was a mosque in the designated plot and the mosque had to be relocated -- a very rare and sensitive issue in Bangladesh. I read a number of books to understand Islamic laws, organized several community meetings, and met the chairman of the Foundation twice to defend our case; we finally got the job done.

We succeeded in our mission and on December 17,1998,I signed the Memorandum of Understanding with Cemcor Ltd., the local subsidiary of Holderbank. It was a thrilling moment for me to conclude a deal with the largest cement and clinker producer in the world. With my signing, Bangladesh received the biggest foreign investment ever, excluding power generation and fertilizer sectors. The deal was so complicated that even the sale price would be paid to us by a letter of credit, the first such letter of credit in Bangladesh.

My third most important accomplishment was joining my company as the deputy technical director and taking charge of 34 technicians and a number of engineers and assistant engineers. I found that for every single technical problem at least one engineer had to be called upon to advise the technicians. However, I wanted our engineers concentrate on research, and after interviewing every technician, I realized that they needed to be educated as to what quality level to maintain. At the end of the educating process, we gave them decision-making authority. Contrary to the suspicions of many of my colleagues, my plan worked, and our technicians are sufficient enough to handle most problems by themselves. The plant downtime was reduced, and engineers could focus on more value adding affairs. Improving employee knowledge and empowerment paid off.